The Guys behind this Publication 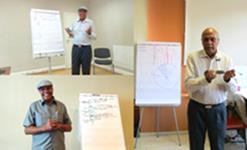 Prabhat was born on 8th August 1949, in one of the leading business families of India, at Bombay. His parents and family always had a deep spiritual quest. This spiritual thirst was profoundly influenced by the philosophy and works of Sri Aurobindo and The Mother; the exemplary life formulated and organized by Them at their spiritual retreat or Ashram, which They created at Pondicherry, in South India, (a former French colony), since 1920. In 1953, the entire family PODDAR sold off everything in Bombay, offered everything to the Sri Aurobindo Ashram at Pondicherry, and moved to live forever there. Of 4 yrs age then, Prabhat has since grown up at the Sri Aurobindo Ashram, studied at the Sri Aurobindo International Centre of Education at Pondicherry, where he also did his higher studies in civil engineering, architecture and town planning.

Can we help you?

If you have any questions, please don't hesitate to